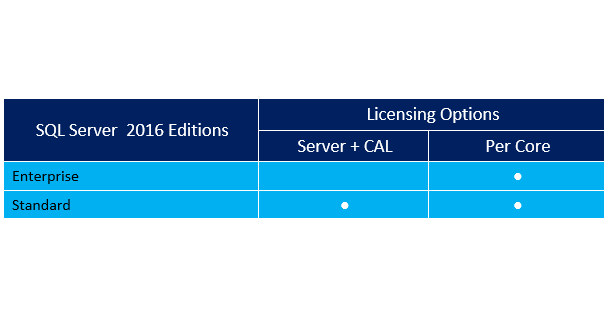 Microsoft SQL Server licensing can be complicated and even a little overwhelming at times. The purpose of this post is to cut through that complexity at an introductory level and then delve deeper in future posts.

The previous release of SQL Server 2014 was commercially available in four editions:

This has been streamlined with the 2016 release and now is available in three commercial editions:

The key difference here being that the licensing and product function of Business Intelligence edition has been absorbed into the Enterprise edition.

Note: SQL Server Express is available as a free download from Microsoft, but it must be noted there are limitations on its supported system requirements. For an overview of the available editions and supported scale of SQL Server, click here.

How are SQL Server licenses sold?

The software licensing options remains the same for SQL Server 2016 as previously available e.g. Server + CAL or Per Core. It must be noted however that the Enterprise edition is only available under the Per Core model.

SQL Server – Per Core Based Licensing

The Per Core licensing option allows for unlimited users or devices to access SQL Server (both internally and externally). The major benefit of this option is that there is no requirement to try to quantify the number of users or devices accessing the SQL Server, be that direct or via indirect means (multiplexing).

Note: When running SQL Server in a physical environment, licenses must be assigned to all of the physical cores on the server. A minimum of four core licenses per physical processor are required, with licenses being sold in packs of two.

So how many licenses do I need? The process to determine this is relatively straight forward:

Example 1 – This SQL Server has two processors, each with six cores: 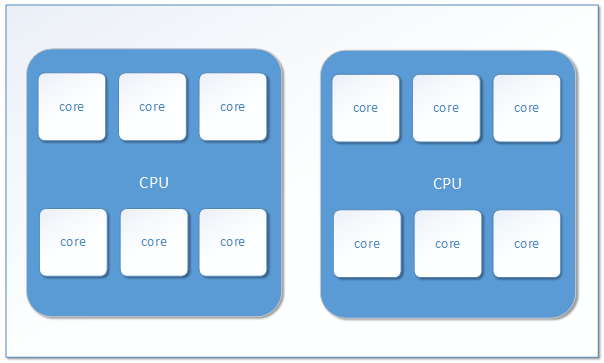 The Per Core option is often the preferred licensing option when:

When licensing SQL Server Standard under the Server + CAL option, customers must assign a license to the physical server hosting any operating system environment (OSE) running SQL Server and acquire a SQL Server CAL for each user or device that accesses the server.

Note: The SQL Server license allows unlimited SQL instances to be deployed on the OSE (physical or virtual).

The Server + CAL option is often the preferred licensing option when:

When deploying SQL Server in virtualised environments, customers have the choice to license either the individual virtual machine(s) or for maximum virtualisation by assigning SQL Server Enterprise Per Core licenses with Software Assurance (software maintenance) to the physical server.

SQL Server – Per Core Based Licensing in a Virtualised Environment

When licensing SQL Server under the Per Core model in a virtualised environment, the following will need to be identified: 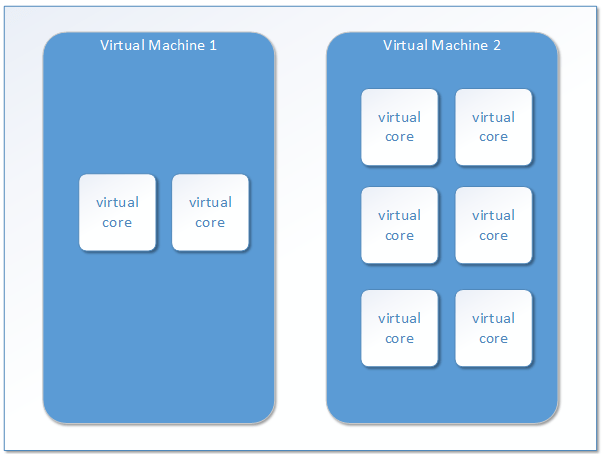 Note: Licensing of SQL Server Enterprise in a virtualised environment is only supported by the Per Core license model.

SQL Server – Server + CAL Based Licensing in a Virtualised Environment

When licensing SQL Server Standard under the Server + CAL model in a virtualised environment, customers are required to purchased one server license per virtual machine running SQL Server irrespective of the number of virtual processors allocated. The following will need to be identified:

Which licensing option is best for me?

SQL Server Standard can be licensed under the Per Core or Server + CAL license options. It is recommended that you engage your Software reseller to determine which option best suits your SQL Server requirements (factoring in server role, access, technical requirements etc.) as there will be a tipping point where the Per Core model is more cost effective and easier to manage.

Some use cases to be aware of

As we have touched on here, there are a number of different licensing models available for SQL Server depending on the scenario and use case. Some of these may be relatively straight forward, others not so and the commercial implications could be significant. I would encourage open dialogue with the Database Administrators within your organisations to ensure there is some governance and understanding as to how SQL Server is deployed within your corporate environment. I intend to delve a little deeper in future posts, but in the meantime some items to consider include: