RightScale conducted its fifth annual State of the Cloud Survey in January 2016 with a special focus on the latest DevOps trends. The overarching trend is that DevOps adoption is growing, especially in the enterprise, with a strong increase in Docker and the use of multiple tools being commonplace.

The survey is the largest on the use of DevOps in the cloud and with respondents representing actual buyers and users of configuration management and container tools. Their answers provide a useful perspective on the state of DevOps today.

The survey asked 1,060 IT professionals about their adoption and use of DevOps tools. Forty-two percent of the respondents represented enterprises with more than 1,000 employees. The margin of error is 3.07 percent.

DevOps Is Growing, Especially in the Enterprise

Docker Usage Doubles While Chef and Puppet Are Neck and Neck

Docker Seeing Greatest Adoption in Europe, with Tech Companies, and with Enterprises

Biggest Challenge with Containers Is Lack of Experience

Container Focus in 2016 Is Education and Experience

DevOps Is Growing, Especially in the Enterprise

In the 12 months since the last State of the Cloud Survey, we’ve seen strong growth in DevOps adoption. 74 percent of respondents are now adopting DevOps up from 66 percent last year.

In 2016, the number climbs to 81 percent of enterprises adopting DevOps while only 70 percent of SMBs say they are adopting it.

Enterprises are adopting DevOps from the bottom up, with business units or divisions (31 percent) and projects and teams (29 percent) most likely to be adopting DevOps. Only 21 percent of enterprises have a company-wide DevOps initiative. 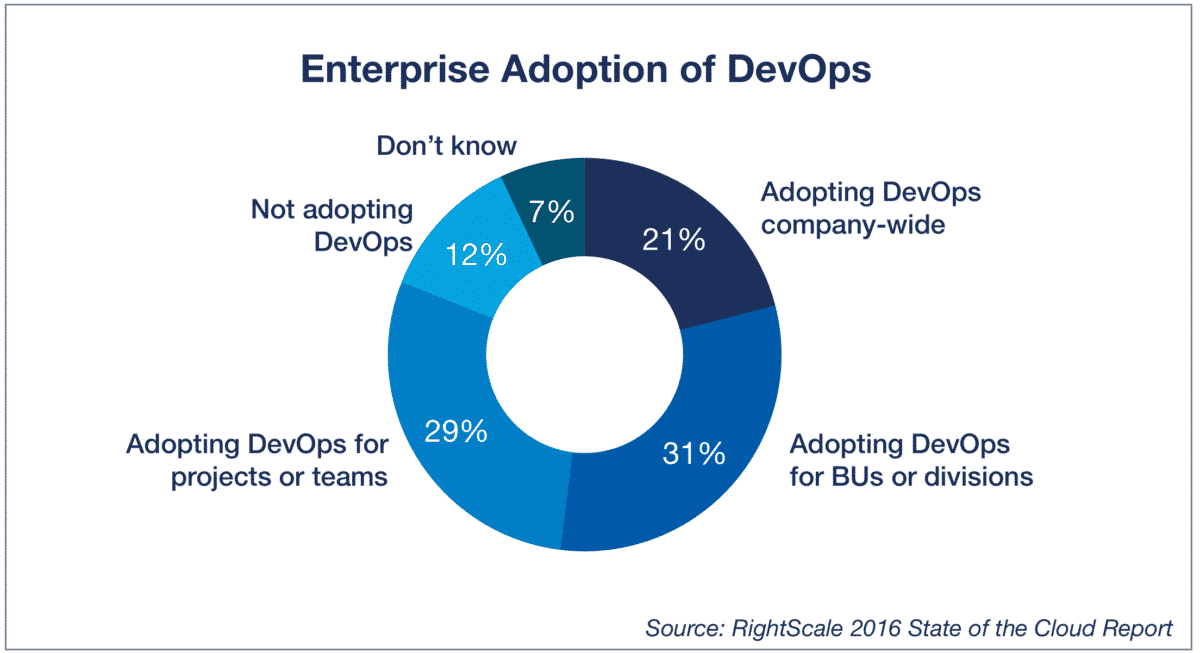 Docker Usage Doubles While Chef and Puppet Are Neck and Neck

In 2016, the use of DevOps tools increased significantly. Chef and Puppet remain the most commonly used DevOps tools at 32 percent each (Chef is up from 28 percent, and Puppet is up from 24 percent in 2015). The biggest gains year-over-year came from Docker, which more than doubled in use (13 percent to 27 percent). Ansible also saw strong gains, doubling from 10 percent to 20 percent adoption. 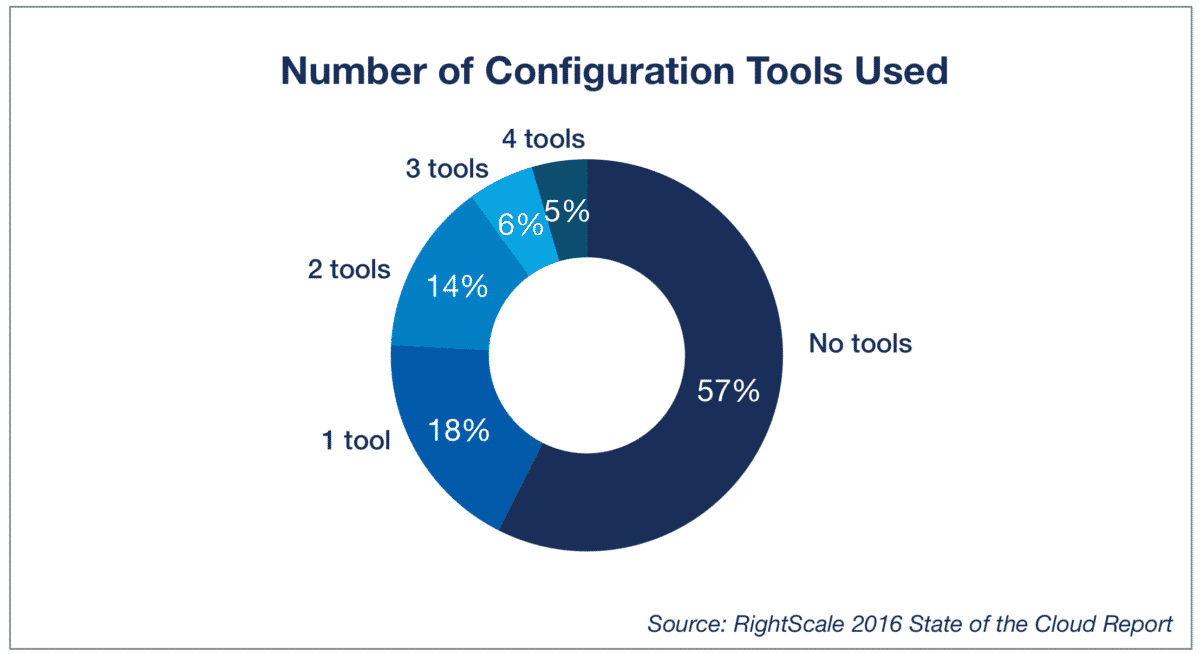 Chef and Puppet are frequently used together: 67 percent of organizations using Chef also use Puppet, and similarly 67 percent of those using Puppet also use Chef. 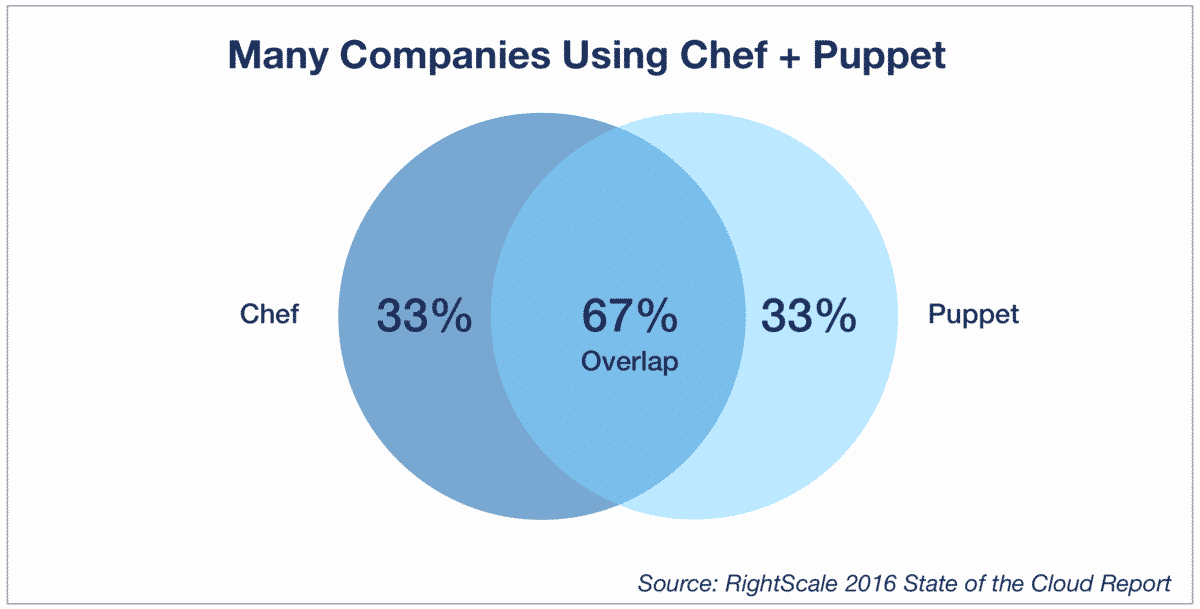 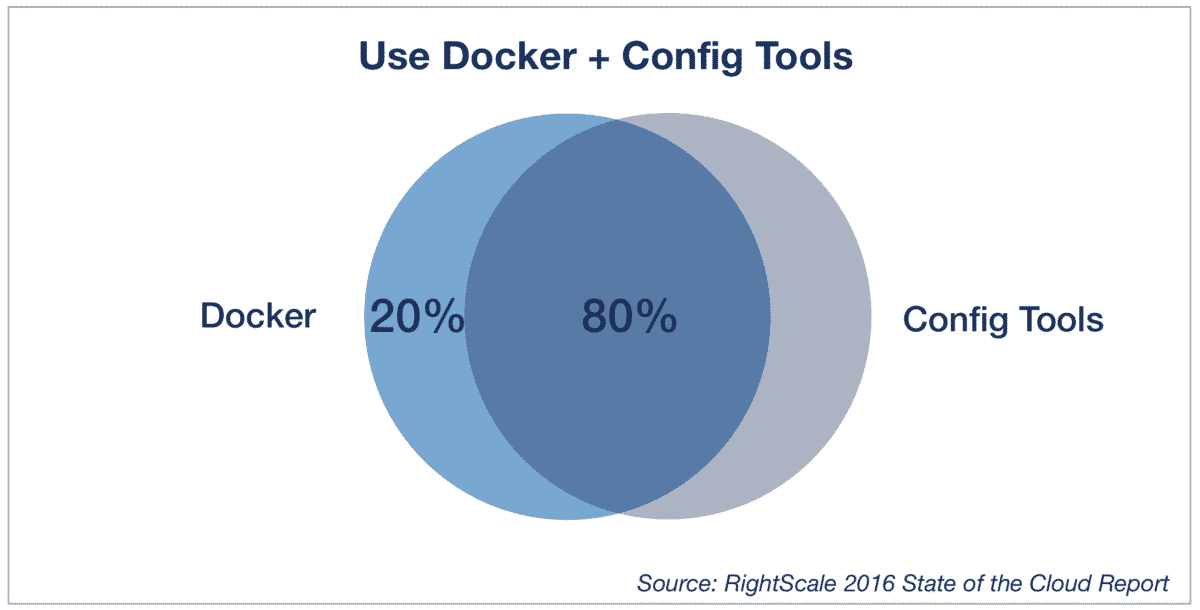 Docker adoption has moved well beyond the experimentation phase. Perhaps surprisingly, enterprises are even further ahead in deploying workloads on Docker with 29 percent running workloads in containers (development only for 8 percent and production workloads for 21 percent). Very few enterprises (8 percent) have no plans to use Docker.

Docker Seeing Greatest Adoption in Europe, with Tech Companies, and with Enterprises

RightScale organized respondents by various cohorts and found that groups that are using Docker most are technology companies (32 percent), enterprises (29 percent), and developers (28 percent). Europe is the region most heavily using Docker today (34 percent), while Asia has the largest percentage of respondents who plan to use Docker (25 percent use today and 42 percent plan to use). 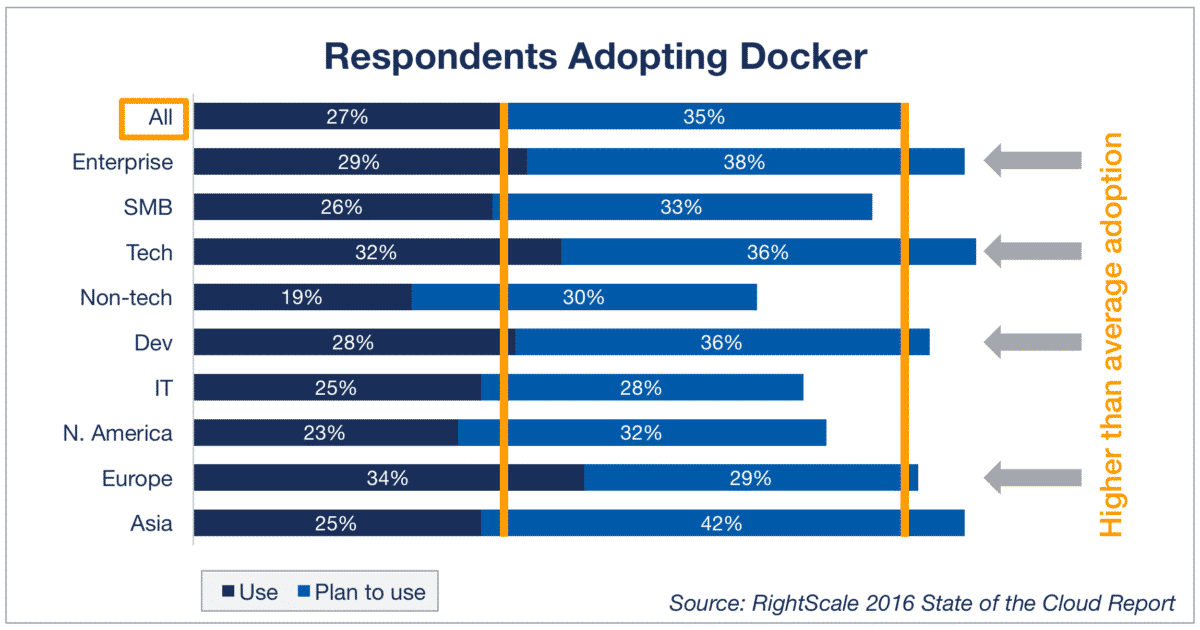 Today containers are primarily being deployed on virtual machines (29 percent) versus bare metal (12 percent). However, there is significant interest in deploying containers directly on bare metal with 24 percent planning to do so.

Biggest Challenge with Containers Is Lack of Experience

Container Focus in 2016 Is Education and Experience

The 2016 State of Cloud Survey shows that interest in DevOps is increasing, while the adoption of Docker containers is spreading like wildfire. Unlike many previous technology shifts where enterprises adopt more slowly, enterprises are actually leading the way and adopting Docker more quickly than smaller organizations.

Chef and Puppet remain the most commonly used DevOps tools with Docker nipping at their heels, but Docker could soon have broader adoption if a significant number of organizations that say they plan to use it follow through on those plans. However, Docker adoption may not be at the expense of other DevOps tools. The survey shows that organizations are not taking a “choose one” approach; rather, many organizations use more than one configuration tool, and the vast majority of Docker users also use at least one configuration tool.

Many Docker watchers have also posited that virtualization vendors could also be at risk if users put Docker on bare metal. That prediction has not played out yet, but the survey shows that more Docker users may be skipping the VM layer in the future.

While interest in Docker is broad, Europe is currently ahead of North America in adoption, while Asia is poised to increase usage. As interest continues to grow, companies are under pressure to gain expertise in Docker. In fact, companies cite lack of experience as one of the largest challenges, and as a result, the biggest container initiatives in 2016 will be to increase their level of education and experience.

Use of Charts and Data In This Report

We encourage the re-use of data, charts, and text published in this report under the terms of this Creative Commons Attribution 4.0 International License. You are free to share and make commercial use of this work as long as you attribute the RightScale 2016 State of the Cloud Report: DevOps Trends as stipulated in the terms of the license.