Managing datacenter server software licenses, as we all know, can be a challenge. One of those challenges is dealing with licensing terms and conditions related to backup servers. First, you have to know—what is the “temperature” of that backup server—hot, warm or cold. Licensing requirements are typically different depending on the type of backup in question. Licensing terms and conditions also vary from publisher to publisher and product to product.

Let’s try to define some terms—what do we mean by hot, warm and cold backup (or “standby”) servers? What about Active and Passive Failover?

Generally, Microsoft requires a license for a server if it is running an instance of the software—you “run an Instance” of software by loading it into memory and executing one or more of its instructions. Once running, an Instance is considered to be running (whether or not its instructions continue to execute) until it is removed from memory.

Microsoft, as part of its Software Assurance program, offers the Cold Back-up for Disaster Recovery benefit. Microsoft server software (including Windows Server) requires having active Software Assurance in place for those licenses in order to install the software on both the production server and the cold backup server under the same license. You must also have Software Assurance on any Client Access Licenses (CALs) required by the software. You need to comply with these terms:

Microsoft provides a Passive Failover Right for SQL Server 2012. A passive SQL Server instance is one that is not serving SQL Server data to clients or running active SQL Server workloads. The secondary server used for failover support does not need to be separately licensed for SQL Server as long as it is truly passive. This Passive Failover Right for SQL Server does not require having active Software Assurance (SA) for this application. But you need to be aware that without SA, the 90-day move restriction is in effect- meaning that you can’t reassign SQL Server licenses within 90 days of the last assignment. With SA License Mobility Rights, you can fail over to the backup server and then go back to the original production server without worrying about the 90-day rule.

If you are licensing SQL Server 2012 under the Core license model, the number of core licenses is calculated based on the server (production or failover machine) that requires the higher number of licenses. 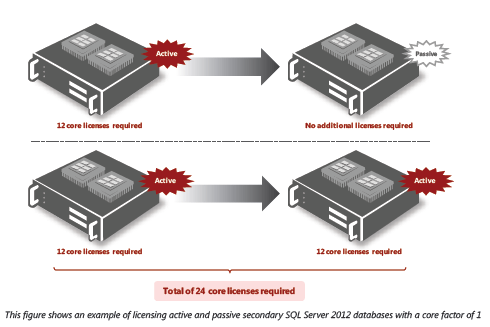 In addition to the type of backup server model in use, there can be other roles for a particular server, such as test/QA, training, or other non-production use roles. Software License Optimization tools can automate the process of applying license exemptions based on the server role. By “exemption” we mean that the server does not require a license, as for example, in the case of most Cold Backup servers. Once the role is defined for the server, the product use rights for that software are applied automatically during license reconciliation, including for example, cold backup and passive failover rights, so that your license consumption is reduced accordingly.

In the next blog on this topic, we’ll delve into IBM licensing for high availability environments.