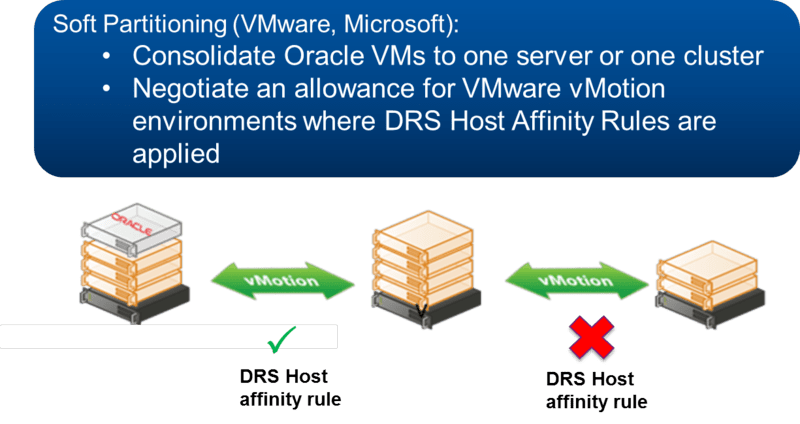 Oracle Database installations in production environments are normally licensed using the Oracle Processor license model, which for Oracle Database Enterprise Edition is based on the number of physical processor cores in the server on which the software is running.

A growing proportion of Oracle Database installations now run in virtual environments. Leading server virtualization providers offer the ability to cluster together multiple physical servers, and to move virtual machines between servers as needed for resource balancing and high availability.

As recently as 2010, it was broadly accepted that Oracle software running in a clustered environment must be licensed for all physical processors in that cluster. However, VMware in 2011 published their Understanding Oracle Certification, Support and Licensing for VMware environments white paper which contends that Oracle software should only be licensed for physical servers on which the Oracle software will actually be run.  The paper says that the combination of DRS Affinity Rules to restrict the movements of virtual machines to certain physical servers, plus detailed tracking of virtual machine movements are sufficient to license only the physical servers on which the software is actually allowed to run.

For Oracle’s part, there is no indication that they have changed their official position. Organizations should exercise caution, and negotiate an agreement with Oracle before deploying Oracle Database software within large clustered virtualization environments where they want to license less than the full capacity of the server cluster. Otherwise, there is a risk of high cost software license liability from an Oracle audit, for this scenario. We have worked with customers that have negotiated this type of exception.