VMware Cloud on AWS Pricing: Is It Really Cheaper Than AWS?

For certain use cases, a seamlessly integrated hybrid offering between VMware and AWS, the world’s largest cloud provider, has its benefits, especially to operations teams familiar with VMware on-premises environments. VMware on AWS Cloud enables enterprises to leverage the VMware suite of services directly on AWS infrastructure for a simplified migration path from their private data centers to the public cloud. It also enables the use of existing VMware management tools while letting applications access the broad portfolio of AWS cloud services.

But the benefits of VMware Cloud on AWS may not be worth the cost for some enterprises when compared to standard AWS. Using the recently announced pricing, we evaluated several different use cases and compared the costs.

VMware Cloud on AWS Is Not the Same As AWS

First, it’s important to understand that VMware Cloud on AWS (VMC) doesn’t look much like the AWS you know. It provides a complete VMware stack (ESXi, vSAN, NSX, and vCenter) provisioned and managed by VMware that runs on top of dedicated hosts provided by AWS. Your accounts for VMC are completely separate from your standard AWS accounts, and you can’t use the AWS console to manage them. Pricing is set by VMware, and your bill will come from VMware. You can integrate to other AWS services (like Relational Database Service) that are running in your standard AWS accounts, and these services will be billed on your normal AWS bill.

With VMC, you pay an hourly price for each host you use. And there is currently only one host size and one region (Oregon), with a minimum of 4 hosts and a maximum of 16 hosts allowed. The number of hosts and regions allowed is expected to expand in the future. You need to provision the hosts through an API or on the VMware Cloud on AWS console. To add or remove hosts, you repeat the process because there is no auto-scaling.

The hourly on-demand price per host is $8.36, which nets out to $71,000 per year per host. This includes hardware, the VMware stack, and support from VMware. If you commit to the minimum of 4 hosts for a full year, you can get a 30 percent discount and bring the baseline cost to $207,948 per year. Commit for 3 years and the 4-host minimum will run $145,821 per year, a 50 percent discount. Of course, extra hosts will cost more. Enterprises should (and will) likely hold off on long-term commitments until they’ve had a chance to vet the platform.

The VMware Hybrid Loyalty Program can provide an additional rebate of up to 25 percent on VMware Cloud AWS. This discount does not require you to transfer licenses, but rather every 2 CPU licenses you have on-prem for vSphere, vSAN, or NSX will give you a 10 percent discount on 2 CPUs for that same service on VMware Cloud on AWS. 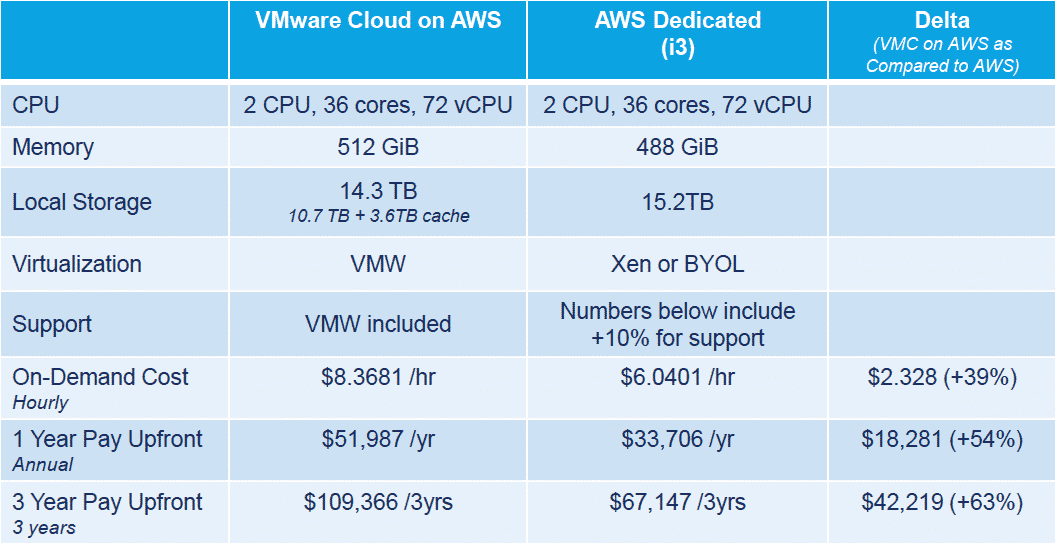 In this model, you are paying 39 percent more for VMC at On-Demand rates and a 54 percent or 63 percent premium for VMC with a 1-year or 3-year commitment. If you are able to gain the maximum of 25 percent discount on hybrid use, you potentially could narrow the premium paid for VMC to a range of 14 to 38 percent. However, many VMware users don’t use all of the services (such as vSAN or NSX) on-prem, so they would not be eligible for the discount on those services in VMC.

VMware would likely argue that the premium you are paying on VMC is for the VMware stack, so that leaves you to decide on the value you place on that stack vs. native AWS options. If your goal is to dynamically move workloads between on-prem and VMC, the value you derive may offset the higher VMC cost, although currently VMC only supports cold migration of workloads.

A more useful comparison is to look at the costs of VMC after you’ve provisioned VMs on the host and compare that to the costs of AWS instances.

In this scenario, we fully utilized the VMC host with a density of eight 8 vCPU VMs. The equivalent AWS instance is an i3.2xlarge. Once again, the VMC instance has slightly more memory and less local disk. And once again, we have added in 10 percent for AWS Enterprise Support since VMC includes support as well. 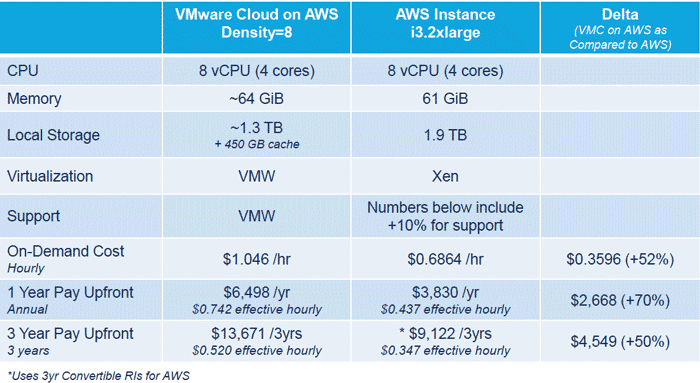 In this scenario, as before, standard AWS costs less. You are paying 52 percent more for VMC at On-Demand rates, 70 percent more for VMC with a 1-year commitment, and a 50 percent premium for VMC with a 3-year commitment. VMC does allow you the flexibility to change the combination of instance sizes on a host, so we used a 3-year Convertible Reserved Instance for the standard AWS option. There is no 1-year option for an AWS Convertible Reserved Instance, so we used the Standard Reserved Instance — that provides somewhat less flexibility for change since it locks you into a region and instance family.

If you are able to gain the maximum of 25 percent discount on hybrid use, you potentially could narrow the premium paid for VMC to a range of 27 to 45 percent. However, if you don’t use all of the services (such as vSAN or NSX) on-prem, you won’t be eligible for the discount on those services in VMC.

The Impact of Oversubscription

In its calculation of a 3-year total cost of ownership (TCO), VMware assumes a level of oversubscription — for example, allocating more CPU capacity than physically exists on the host. In order to reach the conclusion that VMC costs about the same as AWS, VMware notes that “actual costs depend on the consolidation ratio that you set to achieve by taking advantage of VMware software capabilities.” 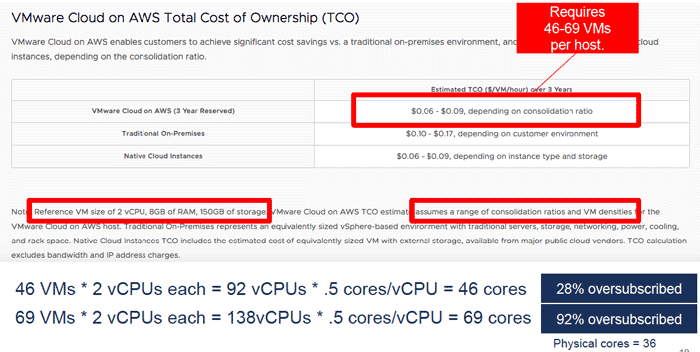 Looking at a reference VM of 2 vCPU (=1 core), we can see that the prices calculated required a 28 to 92 percent continuous oversubscription to the hosts for the entire 3-year term.

The reason that you can oversubscribe on VMware is because, on average, the various VMs are not using all of their provisioned CPU capacity at all times. However, if that is the case, then on standard AWS, you would take similar steps by downsizing instances and/or using auto-scaling. Each time you downsize on AWS, you reduce your cost by 50 percent.

Assuming that you would overprovision when using VMC, but that you would not take the appropriate actions in AWS is comparing apples to oranges and stacks the deck in the comparison. In fact, if appropriate measures are taken on both options (VMC and standard AWS), standard AWS comes out the clear winner on a purely price perspective.

There may be use cases, at least in the short term, where VMC vs. standard AWS makes sense. Assuming that VMware delivers on its goal of providing seamless migration between on-premises environments and VMC, it could be a stepping stone for companies that want to split workloads across private and public clouds or migrate workloads to public cloud with less effort.

However, in the long term, it’s not clear if companies will continue to pay a significant premium for a basic cloud VM that can be more easily and cheaply bought from a variety of public cloud providers. Additionally, once VMC users get a taste of the other add-on services from AWS, it’s likely that their willingness to manage applications and costs across the two distinct and disparate environments will fade. With VMware on AWS Cloud, VMware is kicking the can down the road rather than confronting the existential threat from public clouds, and the company will need to provide a more compelling price point to keep enterprises in the fold over the longer term.