Windows Server 2012, which was rolled out in September, has 4 editions, with 2 editions focused on virtualization—Standard and Datacenter. Standard is about 18.3% of the Datacenter edition cost1. A license covers 2 processors, regardless of the number of cores per processor or the clock rate of the processor. All processors in a server must be covered by licenses and no mixing of editions is allowed. The virtual machine rights are quite different for each edition, where Windows Server 2012 can only be running in 2 VMs for Standard edition, compared to an unlimited number of VMs for a Datacenter edition license. From a financial point of view, are there any conditions that would make stacked2 Standard edition licenses more attractive than Datacenter licenses?

On the other hand, if you are optimizing your hardware with stacked Standard edition licenses in mind, would you come to a different conclusion? If you have more processors per server and a lower core count per processor, how does that change the outcome? Example: A server with 4 dual core processors—8 cores. It would take 2 Datacenter edition licenses to cover the 4 processors at a cost of $4809 x 2=$9,618. The number of VMs, using our 1-4 mapping is 8-32 VMs. The cost of Standard edition licenses to cover 4 processors is $882 x 2 = $1764, where each license covers 2 processors, but only 4 VMs can be running. If you need 8 or 16 VMs then stacking Standard Edition (SE) licenses costs less than Datacenter Edition (DE) as per Table 1. At 24 VMs, DE is less expensive. 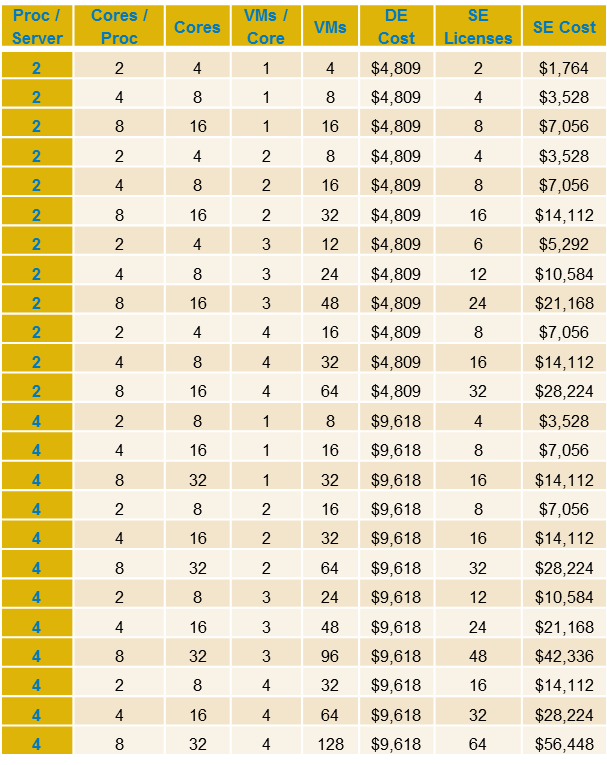