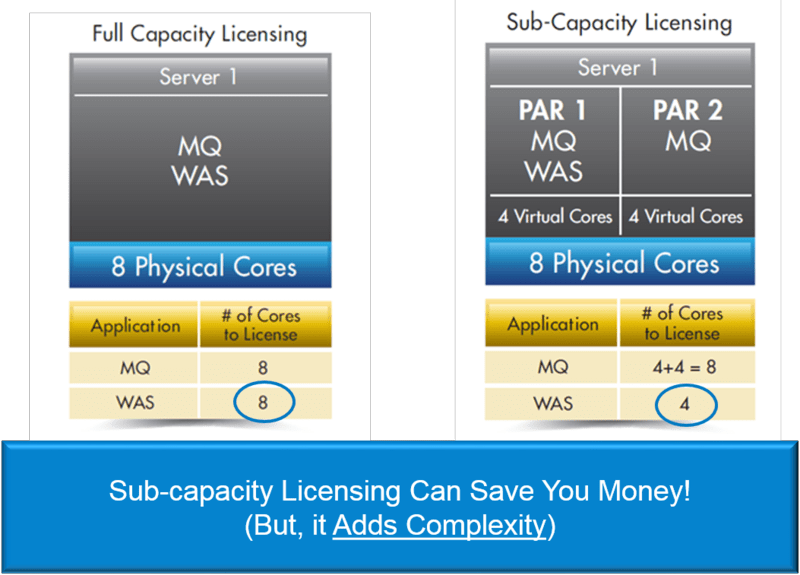 From the IBM Passport Advantage webpage, we see that

“Sub-capacity licensing lets you license an eligible software product for less than the full capacity of your server or group of servers. It provides the licensing granularity needed to leverage various multi-core chip and virtualization technologies.”

Sub-capacity licensing can save you (a lot of) money. But, it adds (a lot of) complexity to IBM license management.

Also as noted on the same page, sub-capacity software licensing terms are documented in the International Passport Advantage Agreement (IPAA).

Most Processor Value Unit (PVU) based IBM software products are eligible for sub-capacity licensing. (The exceptions are noted here: Passport Advantage Sub-capacity Licensing Eligible Product Statement). PVU licensing is based on the processor technology and is defined in the PVU Table on IBM’s website.

Full capacity licensing simply means that you must license the full physical capacity of the server or group of servers where the PVU licensed software is installed. Or, in more technical terms:

If using Full Capacity licensing, the Licensee must obtain PVU entitlements sufficient to cover all activated processor cores in the physical hardware environment made available to or managed by the Program, except for those servers from which the Program has been permanently removed.

Sub-capacity licensing is calculated as:

For any Eligible Product installed in an Eligible Virtualization Environment, you may license the number of PVUs required for the maximum number of virtual cores in the virtual machines (VMs) available to the Eligible Product at any given time.

As shown in the example below, full capacity licensing on the left side shows that all 8 physical cores must be licensed for both IBM MQ and WebSphere Application Server (WAS). The sub-capacity example on the right side shows that IBM MQ requires licenses for 8 cores, while WAS only requires licenses for 4 cores, since it is only running on one partition with 4 virtual cores.

There are several requirements from IBM, as described in the IPAA, to qualify for sub-capacity licensing. These include:

However, you have an alternative. Flexera’s FlexNet Manager is accepted by IBM for sub-capacity reporting, in place of ILMT and TADd.

There are a couple of requirements to qualify for using Flexera’s solution. These include:

There is now a formal ‘registration’ process for customers that want to use FlexNet Manager for IBM for sub-capacity reporting.

See also this previous blog: Higher Costs for Being out of Compliance with IBM Licensing