RightScale will add support for Google Committed Use Discounts to our cost management and optimization tools in the next few weeks.

Read on for all the details on how we analyzed the data. 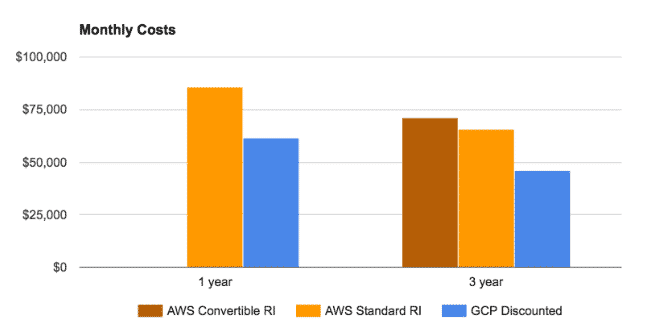 A Typical Use Case

For our purposes, we started with an anonymous real-world profile of a company’s cloud usage as shown below.

Each blue bar represents the cloud spend during one hour of the day over a two-week period. We can can see that the company has a base level of VMs that’s gradually growing over time, with patterns of spiky usage for development workloads that are used during the work week and are shut down at nights and on weekends. This is a pretty typical use pattern that we see among many cloud customers.

There are two types of AWS RIs: Standard and Convertible. Standard RIs are available in 1- or 3-year lengths and are fixed to the chosen instance family (such as the m3 or c3 families). Convertible RIs, available only in 3-year lengths, can be converted between instance families during the lifetime of the RI by making a specific exchange request via the AWS dashboard. This flexibility comes at a cost, however; Convertible RIs offer a smaller discount than Standard 3-year RIs.

Google Committed Use Discounts, by contrast, are always “convertible.” Users commit to a number of vCPUs and a number of GB of memory and in turn gain a discount. They can use any combination of VM sizes, including custom VM sizes, to meet the committed level. Google Committed Use Discounts provide complete flexibility to change the combination of compute resources running.

When considering Standard RIs, a typical use case might shoot for a target RI coverage of around 65 percent for steady-state usage, meaning that 65 percent of steady-state instances would be covered by RIs while 35 percent would be at on-demand rates. The reason that we recommend less than 100 percent RI coverage is that the instances you use and the regions you use may change over time, so you want to give yourself flexibility to make changes on some of your instances and don’t want to be completely locked in. (This typical use case represents a blend of 80 percent RI coverage for production instances and 50 percent development instances assuming a 50/50 split between development and production.) Target RI coverage may of course vary depending on the specific situation.

For customers willing to commit to 3-year RIs, Convertible RIs are an option. (Note: We find that few customers want to lock in for 3 years, even with the Convertible RI option). In this case, because convertible RIs give you the flexibility to move among instance families and regions, you can target a 90 percent RI coverage.

In addition, Google Sustained Use Discounts will still apply to usage above and beyond your commitment level, providing you with additional savings.

For AWS, we assumed m4.large instances for the entire scenario. Of course in a real example there would be a mix of instance sizes, which might slightly change the specific savings, but the general result would be similar.

For Google, we assumed n1-standard-2 VMs for the entire scenario.

We also compared the Google 3-year Committed Use Discount to the AWS 3-year Convertible RI. The total cost of the Google environment was 35 percent less than AWS. In addition, Google Committed Use Discounts are somewhat more flexible than even the AWS Convertible RIs because you can freely change among instance families and zones without needing to make an exchange request as you do with AWS. While the AWS 3-year Standard RI offers a better discount level than Convertible RIs, the lack of flexibility means that you need to target a lower RI coverage level for our typical scenario, so the overall cost for AWS is still higher than Google.  Google’s approach is offering the full flexibility, while also giving the best discount level, which makes for fewer hard tradeoffs for customers.

All in all, the Google pricing model, leveraging the Committed Use Discounts and the flexibility they provide, comes in at a significantly lower cost for this common use case.